Read More About The Oliphant Family

The Genealogy of
Ennis C. Oliphant

The earliest documented Oliphant ancestor in North America was Duncan Oliphant. Duncan was originally from Scotland, but there is no known record of who his Scottish parents were.
DNA studies of descendants now suggest he was related to the Oliphants of Kellie, in Scotland. Sometime in the 17th century, Duncan departed from Scotland. He eventually arrived on Staten Island, in the Dutch Coloney of New Amsterdam (now NY City).
Records show he eventually left Staten Island with a group of other families for the Colony of East Jersey. He settled on a farm in Amwell, East Jersey, where he and his wife, Mary Garrison, had a family of seven children. Duncan Oliphant died August 7, 1734.

James Oliphant, son of Duncan & Mary (Garrison) Oliphant, was born in New Jersey. He inherited part of his father's farm in Amwell, NJ., but sold it and moved to Northampton County, PA. He married Jane Wortman, and they had four children, including Peter Wortman Oliphant (1762-1846). Sometime in the 1790s, James and Jane Oliphant, with their son, Peter Wortman Oliphant, departed from their family home in eastern Pennsylvania (possibly due to the 1793 Yellow Fever Epidemic). The family migrated to eastern New York State, settling in the Ballston area, in what is now Saratoga County. James and Jane are buried in the Ballston Spa Cemetery.

DIED - At Ballston, on the 17th last. Mr. JAMES OLIPHANT, the Father of Duncan Oliphant, at the advanced age of 91 years, leaving a Wife in her 94th year, with whom he lived the uncommonly long period of 69 years. He was a native of New Jersey, had long led a religious life, and died, there is reason to hope, the death of the righteous. His disorder was the palsy, with which he lay speechless, for two weeks.
(Unidentified source: 1816)

Peter Wortman Oliphant, son of James & Jane (Wortman) Oliphant, was born in Pennsylvania, but went to eastern New York State with his parents. His parents remained in Saratoga County, NY, but Peter W. Oliphant, and his wife, Elizabeth (Scofield) Oliphant, moved to Herkimer County, NY. The 1810 U.S. Census shows the family living in Herkimer county, including their son, Peter Scofield Oliphant (1805-1902). Their eldest son left New York State about 1806, and migrated to what is now the Province of Ontario, Canada. At some point between 1810 and the beginning of the War of 1812, Peter Wortman Oliphant and Betsy (Scofield) Oliphant also migrated to Ontario, with the rest of their children. The family settled in the Clarkson area (which is now part of Mississauga, Ontario).
The gravesites for Peter Wortman Oliphant and his wife, Elizabeth (Scofield) Oliphant are located in the oldest section of Springcreek Cemetery, in the tiny Village of  Clarkson (which is now part of Mississauga), in the Province of Ontario, Canada, along with many of their children, grandchildren, and other relatives.

Peter Scofield Oliphant was born on October 9, 1805, in Herkimer County, New York, a son of Peter Wortman and Elizabeth (Scofield) Oliphant. His parents took him to Canada sometime between 1810 and the start of the War of 1812. Peter was raised in what is now Mississauga, Ontario, just west of the City of Toronto. Peter Scofield Oliphant and his brother, Hiram W. Oliphant, purchased property in the new village of Lockport, on the Erie Canal, in 1827. They soon sold their properties, with Hiram moving to Monroe County, NY, and with Peter S. Oliphant moving to Cambria, in Niagara County, NY. Peter S. Oliphant and his son, Silas M. Oliphant, owned farms on the Ridge Road (Route 104) on the southwest corner with Baer Road.
Peter S. Oliphant was married a total of three times. His third wife was Anna Augusta Pierce (1829-1917), a grand-daughter of Gad Pierce II of Niagara Falls, NY.
Peter Scofield Oliphant and Anna Augusta (Pierce) Oliphant married November 30, 1859. Peter and Anna had two children: Robert Edward Lee Oliphant (1865-1947) and Cora May Oliphant (1869-1920).

Robert Edward Lee Oliphant
(known by most people as "Lee")

Rena was married to
John E. Webster
prior to her marriage to
R. E. Lee Oliphant

Robert Edward Lee Olipant and Rena C. (Martin) Oliphant had a  son: Ennis Carew Oliphant, born June 25, 1904. A family story states they may have had at least one other child who was stillborn or died in infancy, although there is no known documentation of this.

Margaret HEYWANG was born July 30, 1902 in Niagara Falls, N.Y.,  and was a daughter of Charles and Elizabeth (FINK) HEYWANG. The HEYWANG family lived at 2402 Ontario Avenue in a house that was built for Charles HEYWANG.  When Margaret married Ennis Carew OLIPHANT on May 30, 1923, the newlyweds lived upstairs. The HEYWANG family also included Margaret’s older brother, Carl and her younger sister, Louise. Another brother, Walter, died in 1896. Margaret’s paternal grandfather, John HEYWANG, Jr., was born in the Alsace-Lorraine region on the French-German border.  He was the only son of John HEYWANG, Sr. and he had 12 sisters. John, Jr. sailed to America in 1852 at the age of 30. He was married to Louise CORMAN. They lived in Manhattan, New York City, and later moved to Staten Island, Richmond County, N.Y.  An 1869 New York City Directory, lists him as: Heywang John J., butcher, at 122 Prince, residing at 124 Prince. John and Louise (CORMAN) HEYWANG had children in New York City, and one of their sons, Charles married Elizabeth FINK, daughter of Konrad & Margaret (WALTER) FINK of Niagara Falls, N.Y.

Read More About The Heywang Family

Read More About The Fink Family

Margaret (Heywang) Oliphant
& Jennie B. (Scott) Martin
(Jennie was the wife of Leon)

Ennis & Margaret lived in a Trailor Home in St. Petersburg, Florida for a brief period of time in the mid-1960s.

Ennis wrestling with an alligator

Ennis Carew Oliphant operated a streetcar in Niagara Falls, NY. He also worked for the Great Gorge Route and drove a City Bus.

Marjorie (Oliphant) Eodice stated her father,  Ennis C. Oliphant, collected tolls for the Great Gorge Route Railway, employed at a location at the "Honeymoon Bridge". She recalled her father taking her for a ride on the Great Gorge Route when she was about 5 years of age (about 1928).
Marjorie also states her father later operated a streetcar from Niagara Falls to LaSalle at Buffalo & Cayuga Avenues, driving a bus on the same route after the strretcar ceased operation.
Ennis Oliphant was employed by the IRC (the International Railway Company), whick owned the  bridge when he was employed as a toll collector, and owned the strreetcars and busses he operated in Niagara Falls.
After he stopped driving the City Bus, Ennis was employed at Bell Aircraft, in Niagara Falls, as a fireman. His daughters, Marjorie and Betty Oliphant also worked at Bell Aircraft during World War II. Betty worked "on the line".

Bell Aircraft Corporation - It's Your War Too

After working at Bell Aircraft in Niagara Falls, Ennis Oliphant worked at Fort Niagara, in Youngstown, NY, where he was also employed as a fireman. 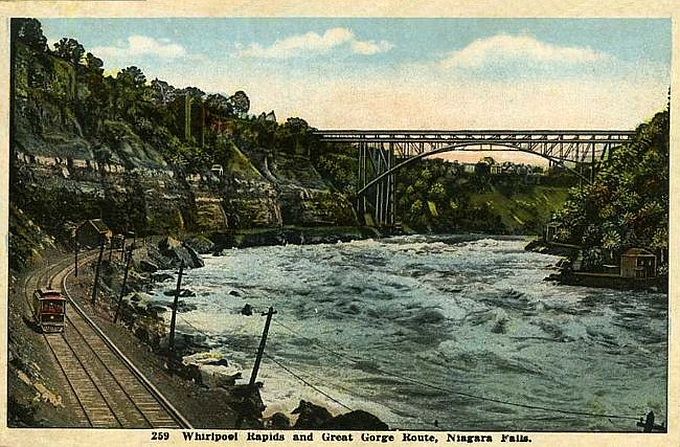 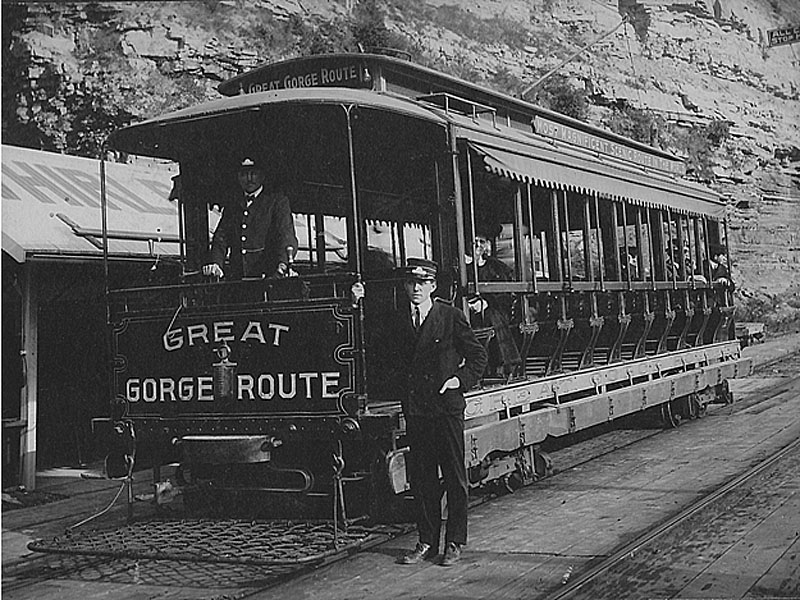 The Upper Steel Arch Bridge, also known as the Falls View Bridge and Honeymoon Bridge, opened to traffic on June 23, 1897, and with a span of 840 feet, it became the longest such structure in the world. The completed bridge was one floor, and had double tracks for electric trolleys, as well as room for carriages and pedestrians. The Upper Steel Arch Bridge was a beautiful and graceful structure which offered a spectacular view of the Falls.
The abutments of the bridge were so close to the water that they had to be constantly protected from the ice which jammed in the river every year. In January, 1938, an ice jam caused by a combination of thin ice on Lake Erie, a 5-day thaw and 3 days of high winds spelled the end of the Upper Steel Arch Bridge. Nearly 100 feet of ice twisted the steel frame of the bridge, and as it creaked and groaned, spectators knew that it would be only a matter of time before the bridge collapsed. At about 4:10 p.m. on January 27, 1938, a movement of ice on the American side pushed the bridge off of its abutment. With a huge roar, it collapsed into the gorge, forming a twisted steel "W" on the ice below. The wreckage of the bridge was cut into six sections which remained for the duration of the winter, until the ice bridge began to break-up. On April 12, 1938, the pieces of the once-grand bridge began to sink, one by one, the last one disappearing from view at 4:00 p.m.

(Note: In addition to the US Census every 10 years, New York State did Census Reports other years)

Family stories state that Rena & Lee Oliphant had at least one other infant, who was stillborn or died soon after birth, and was buried on the family farm. There is no known record of this birth.
Ennis C. Oliphant (1904-1969) was their only surviving child.
Rena had three surviving children by her first husband, John E. Webster:
Ethel G. Webster (1890-1969),
Bessie M. Webster (1893-1969),
Mabel L. Webster (1897-1969).
There is no known record of who the other child was, or who the father of that child was.

Note: Robert Edward Lee Oliphant and his son, Ennis Carew Oliphant were living by themselves in Wilson, NY in 1925.

Ennis was living for a while on a farm near Molyneaux Corners on Ridge Road.

E. L. Oliphant was Robert Edward Lee Oliphant
E. C. Oliphant was Ennis Carew Oliphant (son of "Lee" Oliphant)
The Oliphants were 'Boarders' in the home of John & Henrietta Jewell
on Ontario Avenue, in the City of Niagara Falls, NY.
(Note: 16 y.o. Ennis Oliphant lived on Ontario Avenue, the same street as his future wife, Margaret Heywang. This is probably where they first met.)

The 1940 Census includes Ennis, Margaret and 5 of their children, living on a farm in the Town of Porter, that they own and is valued at $2,500.
This Census includes information about the Highest Grade Level Completed in school. Ennis completed the 8th Grade, Margaret had 4 years of High School.
Marjorie and Betty completed 1 year of High School, Dorothy completed the 7th Grade, and Charles completed 3rd Grade. Helen was not yet in School. James was not born until 1943, so he does not appear on this Census.
This Census also shows that the Last place of Residence for all family members was Niagara Falls.

Marriage License has the following information: