Margaret HEYWANG was born July 30, 1902 in Niagara Falls, N.Y.,  and was a daughter of Charles and Elizabeth (FINK) HEYWANG. The HEYWANG family lived at 2402 Ontario Avenue in a house that was built for Charles HEYWANG.  When Margaret married Ennis Carew OLIPHANT on May 30, 1923, the newlyweds lived upstairs. The HEYWANG family also included Margaret’s older brother, Carl and her younger sister, Louise. Another brother, Walter, died in 1896. Margaret’s paternal grandfather, John HEYWANG, Jr., was born in the Alsace-Lorraine region on the French-German border.  He was the only son of John HEYWANG, Sr. and he had 12 sisters. John, Jr. sailed to America in 1852 at the age of 30. He was married to Louise CORMAN. They lived in Manhattan, New York City, and later moved to Staten Island, Richmond County, N.Y.  An 1869 New York City Directory, lists him as: Heywang John J., butcher, at 122 Prince, residing at 124 Prince. John and Louise (CORMAN) HEYWANG had children in New York City, and one of their sons, Charles married Elizabeth FINK, daughter of Konrad & Margaret (WALTER) FINK of Niagara Falls, N.Y.

Read More About The Oliphant Family

Use the links below for more information about the Heywangs and various related family members:

Margaret (Heywang) Oliphant
& Jennie B. (Scott) Martin
(Jennie was the wife of Leon)

Ennis & Margaret lived in a Trailor Home in St. Petersburg, Florida for a brief period of time in the mid-1960s.

Ennis wrestling with an alligator

Konrad (Conrad) Fink was born on August 2, 1835, in the Seissen, Blaubeuren, in the Kingdom of Wüerttemberg, [now located in Baden-Württemberg, Germany]. At the age of 18 Konrad Fink left Wüerttemberg, and arrived in the Niagara County, NY, in 1854.
Konrad Fink settled in the Niagara County village known as Bellevue (Also known as the village of "Suspension Bridge"), which is now part of the City of Niagara Fallls, NY.

Use the links below for additional information about Konrad Fink:

Read More About the Fink Family

Read More About the Heywang Family 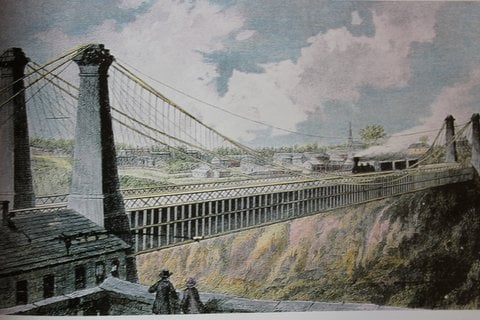 JACOB FINK (deceased) played an honorable part in the civic and business life of the city of Niagara Falls, N. Y., and commanded the respect and enjoyed the esteem of the community in which he long maintained his home, and in which he was regarded as a loyal and useful citizen.
Jacob Fink was born in Germany, Jan. 16, 1846, and his death occurred at his home in Niagara Falls, May 1, 1912. He had school privileges in his native land, where he also served an apprenticeship to the carpenter's trade.
At the age of eighteen years he accompanied his uncle, the late Conrad Fink, to America, after the latter had made one of his periodical trips to Germany, and came with him to the village of Niagara Falls, where Conrad Fink had established his home a number of years prior to that time. Here Jacob Fink found employment in the railroad shops, and later became associated with Daniel Phillips, a well known contractor and builder at that time. Still later he was employed as a carpenter in the service of the Niagara Falls Brewing Company, with which corporation he thus continued until his retirement from active affairs, about four years prior to his death. Mr. Fink was not only a skilled artisan, but also a man of broad and comprehensive reading, sound judgment and well fortified opinions. He was one of the organizers and incorporators of the Niagara Permanent Savings & Loan Association, in the upbuilding of which he tool, an active part, and which he served as a trustee until the time of his death. Mr. Fink belonged to the Independent Order of Odd Fellows and was noble grand of the local lodge, and he exemplified the work of this fraternity in both the English and German languages. He was liberal and progressive as a citizen, was generous in his contributions to the church of which both he and wife were members, and cast his vote with the political party that best measured up to his ideals of right and justice.
Jacob Fink married Mary Princing, who died in 1915.
A record of their five children is as follows: Jacob J., who is deceased, served as a soldier in the Spanish‑American war; Gottlieb, who died July 11, 1920; Conrad, who is deceased; Barbara, who is the wife of John J. DeShinsky, prominent in the lumber business at Niagara Falls; and Anna, who is the wife of Samuel R. Barton, who is junior member of the firm of Perry & Barton, Niagara Falls, which represents the International Battery Service. Mr. Barton is a native of Buffalo. He was married in 1900 to Miss Anna Fink, and they have two children and reside at No. 1608 Main street.
John J. DeShinsky was born at Tonawanda, N. Y., and was educated in the public schools. He has been identified with the lumber business during practically his entire active career, and at present is superintendent of the Haeberle Lumber Company, a solid enterprise of Niagara Falls. He is a member of Niagara River Lodge No. 785, F. & A. M., and belongs also to the Acasia Club. Mr. De Shinsky married Barbara Fink, and they have had two children, Jack P. and Owen; the younger son dying in childhood. Mrs. DeShinsky belongs to the Eastern Star. The family resides at No. 1618 Eighth street, Niagara Falls.

Konrad Fink died today at his home ... 915 Niagara street after a brief illness. He was 81 years old and had lived here since 1866. He was born in Germany. He was a former president of the village of Suspension Bridge and had served in a number of offficial capacities in the city. He built one of the first business blocks in the north end of the city. He was one of the oldest members of Niagara lodge, No. 81, IOOF.
He is survived by his widow, three daughters and one son. The funeral will be held on Monday.

Use the links below for gravesite information and photos for members of the Fink Family:

Fink, Konrad, was born in Wurtemburg, Germany, August 3, 1835, a son of Jacob Fink. Konrad Fink was educated in the public schools of his native place and at an early age learned the blacksmith's trade. In 1854 he immigrated to America, settling at Niagara Falls, N. Y., and was at once employed in the building of the first Suspension Bridge across the Niagara River. In 1857 he entered the employ of the New York Central Railroad Company and worked in the shops of that Company for ten years, at the end of which time he established his present business as dealer in groceries, provisions and liquors, and in which he has met with success. Mr. Fink is a property owner and a director of the Bank of Suspension Bridge. Mr. Fink and Mrs. Margaret Walter were married November 20, 1858; she had one son, Christian Fink, by a former marriage with Christian Fink, brother of Konrad. She died in 1887, and on September 10, 1895, he married Margaret Walter, niece of his first wife. Three children of the first marriage are living: Dora, Margaret and Elizabeth; of the last marriage one child came to bless their home. Mr. Fink has been twice president of the village of Suspension Bridge, and three times served as trustee; at the present time he is assessor of Niagara Falls city.

Konrad Fink was born in Germany, August 3rd, 1 835 and came to Suspension Bridge in February, 1854. Mr. Fink, who is the proprietor of a grocery and saloon, has been town assessor and water commissioner, and president of the village of Suspension Bridge.

Konrad Fink was born in Germany, August 3rd, 1835 and came to Suspension Bridge in February, 1854. Mr. Fink, who is the proprietor of a grocery and saloon, has been town assessor and water commissioner, and president of the village of Suspension Bridge.

(Lodges of Wilson, NY)
LODGES. This village can boast of several well organized and flourishing secret orders and societies. The masonic lodge was organized and chartered under the name of Ontario Lodge, No. 376, F. and A. M. of Wilson, July 8th, 1855, with seven charter members. The first officers were George L. Moote, master; R. L. McChesney, senior warden; Thomas Lyons, junior warden. Their first meetings were held in the 2nd story of the brick building on the northwest corner of Young and Catharine streets. An uninterrupted prosperity enabled them in April, 1866, to purchase this building, which they remodeled, fitting up convenient rooms for their accommodation, which they still occupy, renting the first floor for mercantile purposes. The present membership is 76. Regular meetings, first and third Wednesdays in each month. Annual election at the last meeting in December. Present officers: Henry Sanford, W. M.; John A. Strong, S. W.; E. E. Dox, jr., W.; Luther Wilson, treasurer; R. F. Wilson, secretary. Lake Shore Lodge, No. 331, I. O. O. F. of Wilson was organized July 25th, 1872, by Konrad Fink, D.D.G.M. of Suspension Bridge, with eight charter members. The first officers were: R. L. B. McChesney, N. G.; Erastus McKnight, V. G.; J. Harvey Hutchings, secretary; John Darnoch, president. Their lodge room is in Pike's Hall, on Young street. Regular meetings, every Thursday evening, Semi-annual elections occur at the last meetings in June and December.

1902 Newspaper Ad for The Bank of Susspension Bridge

Konrad Fink listed as one of the Bank Directors

The Heywang Family in Europe, Their Arrival in New York City,
Living on Staten Island, and in Niagara County, NY

17 December 1896: The Buffalo Courier:
(Niagara Falls) Mrs. Christian Ade, wife of Samuel G. Ade of Chicago, died at the residence of her father, Assessor Conrad Fink of this city, last evening, aftrer a long illness, aged 35 years. A husband, two children and many relatives and friends survive her. The funeral is announced to take place from the residence of Mr. Fink at 10 o'clock Friday morning. The Rev. J. H. Asbeck, pastor of the German Zion's Church, officiating.

* Apparently, Louise Heywang was counted twice on ths Census; once at home and once at her school.

The 1940 Census includes Ennis, Margaret and 5 of their children, living on a farm in the Town of Porter, that they own and is valued at $2,500.
This Census includes information about the Highest Grade Level Completed in school. Ennis completed the 8th Grade, Margaret had 4 years of High School.
Marjorie and Betty completed 1 year of High School, Dorothy completed the 7th Grade, and Charles completed 3rd Grade. Helen was not yet in School. James was not born until 1943, so he does not appear on this Census.
This Census also shows that the Last place of Residence for all family members was Niagara Falls.

Marriage License has the following information:

Konrad Fink was married three times. Two of his wives had the same surname: